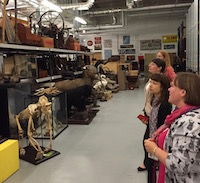 Today I've been in London for a meeting of the GEM board. GEM, aka the Group for Education in Museums, is a professional network for everyone involved in heritage learning and I've been a member of its board for the past six years. This was my last full board meeting as I've reached the end of my term and will be standing down at the AGM at the end of August. I'm quite sad about it.   I can't say it's been an easy task being on the board of an organisation that has no public funding and exists on the energy, tenacity, commitment and (dare I say) stubbornness of those involved, but I've learnt a tremendous amount during my time with GEM and it's made me fully appreciate the importance of such networks to the development of our sector.

GEM has been a huge part of my professional life, not just for the past six years but since the very beginning of my career back in the late 1990s. As a fledgeling museum educator I found GEM's publications, training courses and, later, the famous jismail discussion list indispensible to my developing practice and benefited enormously from the advice and guidance I had from older, wiser heads than mine. I went to my first GEM conference in Liverpool in about 2001 and found it an eye-opening, mind-expanding experience - help, support, inspiration, guidance, a room full of role models and sound practical advice all in one place, and a diverse community of people who genuinely wanted to learn from each other and share their knowledge and experience with others. When I moved back to Yorkshire I got involved in the local network, became an area convener, and a few years later got 'the call' (as it's known!) and was asked if I might be interested in joining the GEM board. The last six years have been a sharp learning curve and given me an insight into the challenges of running a charity in a recession - one that receives no core funding and has to earn 100% of its income from its own efforts. I've had the privilege of working with some sharp, insightful people whose passion for heritage learning and the cultural sector as a whole is inspirational. I've continued to benefit from the strength, diversity and generosity of a brilliant network and I hope I've been able to give a little bit back.

It's no secret that GEM is going through challenging times - what heritage sector organisation isn't - but I'm hopeful that there are some positive opportunities in the offing and that GEM has the energy, talent and imagination to make the most of them. Heritage educators are nothing if not resourceful. While the GEM of the future may not be the same kind of organisation that it's been in the past, I believe there's still a need for the work it does. GEM's efforts to professionalise and democratise heritage learning through initiatives like its foundation course, establishing core competencies for heritage educators and developing a professional membership scheme not only support individual practitioners, they also help to champion the importance of learning and raise its profile at a time when learning staff and departments can be more susceptible than other departments to funding cuts.

GEM has a great regional network - there's probably one near you. There's also a great national conference coming up in Edinburgh at the end of August. If you're involved in museum learning and you haven't yet discovered GEM, why not have a look?