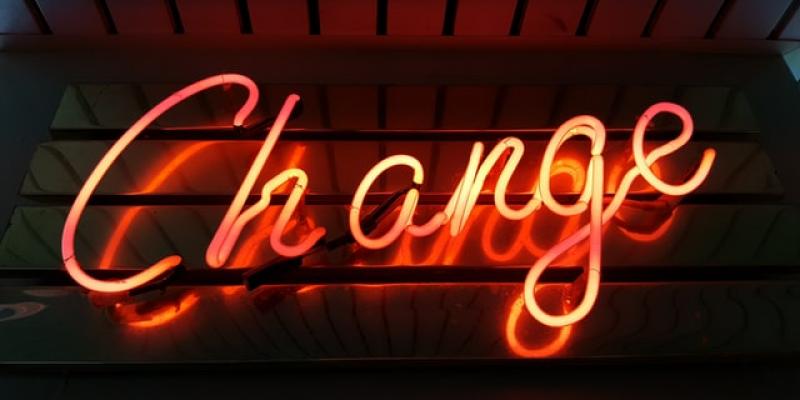 This year has been all about coping with change, both at an organisational level (if you work in one) and individually. I've been AWOL from here for a little while because of significant changes in my own life that temporarily wrecked my capacity to keep up with anything other than the work I'm contracted to do. A few months ago my 14-year relationship came to an end, leaving me a single parent. It wasn't my decision and I didn't see it coming so it really felt like the ground had dropped out from under me.

At some point in future I'll write about what helped me cope with a busy work schedule through a time of massive personal upheaval. The past few months haven't been easy and I'm enormously grateful to the people I'm working with for their flexibility and understanding. Things are looking a bit better now and I'm about to take a break from work, but before I do I wanted to share some of the things I've been reading, listening to and thinking about lately.

Some months ago a colleague on the Platt Hall In-between project recommended a book called Transitions by William Bridges.  It took me a while to get round to reading it but in the light of what's happened I wish I'd got there sooner. I've found his approach to thinking about change and its relationship to the inner process of transition incredibly helpful both personally and professionally.

Like many people in the cultural sector, I've been following the 'culture wars' saga with frequent eyerolls and a depressing sense of powerlessness as the work of museums and heritage organisations has been deliberately twisted and misinterpreted by sections of the media. This article by Brian Cathcart, a professor of journalism and co-founder of the Hacked Off campaign, is a clear, concise and damning summary of the way this has affected the National Trust and is well worth a read. In a similar vein, I enjoyed this History Extra podcast with historian and screenwriter Alex von Tunzelmann who gives the ongoing debate about statues some much-needed context. She reminds us that statues are propaganda and calls for a more human, nuanced debate. She's also very funny. I have added her book, Fallen Idols, to my ever-expanding pile of things I struggle to find time to read.

Meanwhile I've been thinking about language, again. It's something I think about a lot - it's partly the frustrated writer in me, but mostly because language is a big part of how we all experience the world and in museums it's a significant part of how we mediate our collections and stories for others. That extends to how we talk about the people we're trying to engage with, particularly in the context of audience development and evaluation where often we're grouping people into broad categories as a shorthand for identifying common perspectives and experiences. It's necessary but something I've always found uncomfortable, particularly when it involves desribing people according to externally perceived characteristics rather than their own identity, interests and preferences. I've had a lot of conversations recently about alternatives to the ugly term BAME which is used to categorise Black and Minority Ethnic people but which is fraught with problems. There's a great piece here (downloads in Word) from educator Rosemary Campbell-Stephens MBE that unpicks some of the issues around language and reframes the conversation about race. I'd also recommend the #BAMEOver statement from IncArts that makes a clear statement about inclusive language in an arts context.

My final thought is about connection. I recently began working with a new mentee, Tara Griffin, through the Museums Association's Associateship (AMA) programme. I've been a mentor for the AMA for years and I'm a big advocate for it - I found it a transformative experience when I was an early career museum person back in the early 2000s and I've worked with some brilliant mentees since then. What I'd forgotten, having not mentored anyone for a while, is how much I gain from being a mentor. I've loved the conversations I've had so far with Tara. She offers me a fresh perspective on current issues and she's clever and creative and knows about lots of things that I don't. I am looking forward to chatting more over the next couple of years as we navigate through the AMA. It also made me realise how much I've missed making connections over this past year. Not friendship specifically - I have kept up with those - but those unexpected conversations that you have at events or conferences or just out and about with people you don't know that lead you to new perspectives or ideas. Having realised I need to get out more I've taken a deep breath and booked to go to the real life Museums Association conference in November and I'm also looking at the Conference of Holbeck Moor, run by the Slunglow Theatre Company whose work and philosophy I have long admired. It's perilously close to the start of term but if I can manage to sort childcare I'll see you there.

Photo by Ross Findon on Unsplash