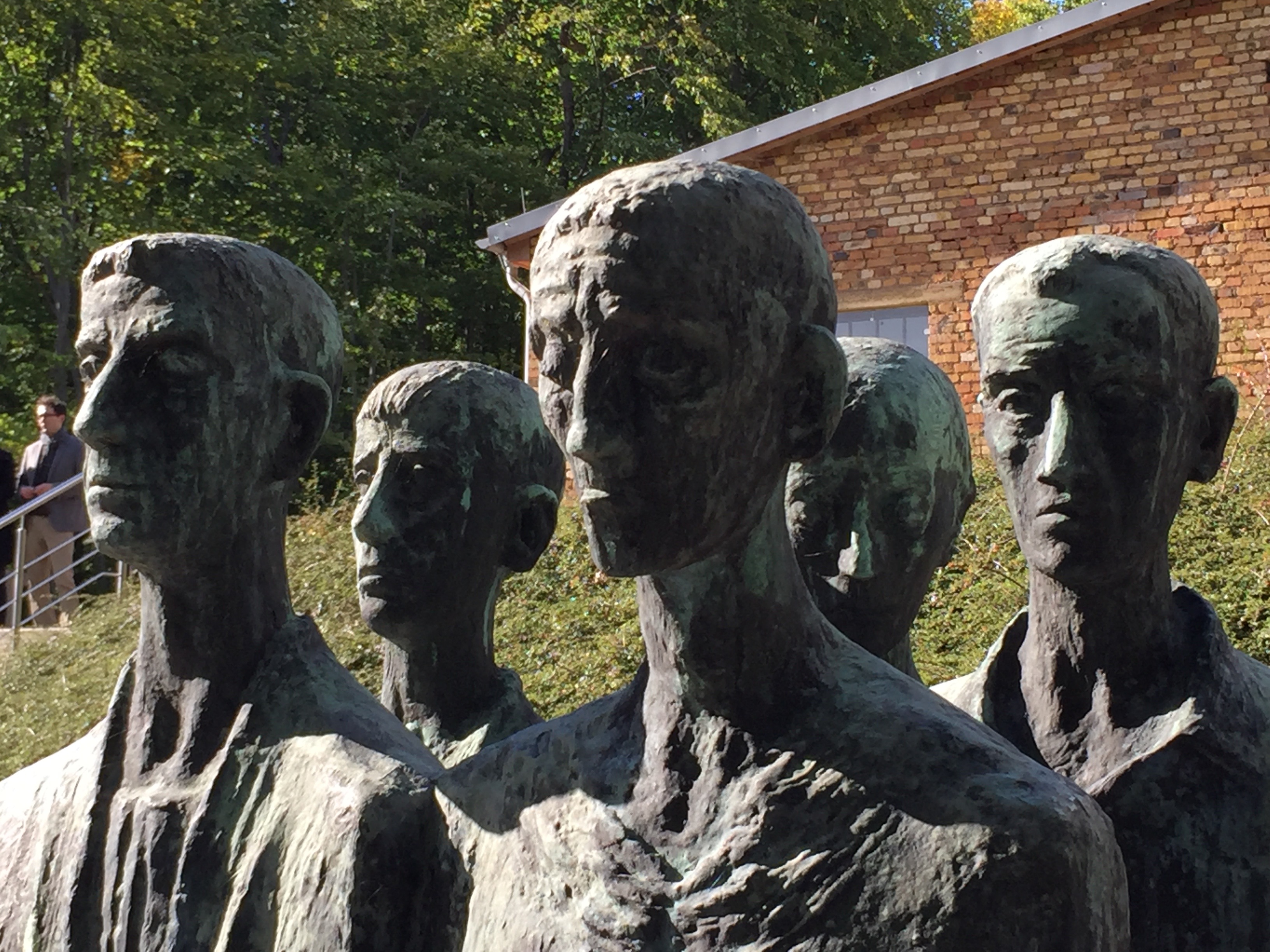 I'm currently working with a local charity, the Holocaust Survivors' Friendship Association, on a project to create a new Learning Centre at the University of Huddersfield. I've been working with the HSFA since 2008 on various learning projects but this is far and away the most exciting and will be a real step change in what the Association can do for its audiences. We submit the HLF bid in March and will be keeping our fingers crossed after that.

As part of the research for the bid I recently went to Germany with two colleagues to visit sites of research and commemoration relating to the Holocaust. It was an intense trip: three concentration camps and one archive in four days, with considerable distances to travel between them. The purpose was to find out how the German sites interpret and commemorate Holocaust stories and find out if there was potential for us to work with them in future.

We chose the sites we visited because they were key to individual HSFA members' experiences: HSFA members Eugene Black and John Chillag had both been prisoners at Bergen Belsen; Eugene, John and another member, Arek Hersh, were imprisoned in Buchenwald; and Eugene had worked as a forced labourer in the tunnels at Mittelbau-Dora. The archive we visited, the International Tracing Service, holds the original National Socialist-era archive documenting the fate of the victims of Nazi persecution. Through a partnership with the ITS the HSFA has been able to make copies of documentation relating to its members' persecution freely available online.

It's hard to know what to say about a visit to one concentration camp, never mind three, though we picked up some insights to feed into our HLF bid.

1. You can't understand the Holocaust without the context of the National Socialist regime

This ought to be obvious, but because UK Holocaust teaching and commemorative events are so focused on Auschwitz it frequently isn't. The story at the concentration camp sites we visited isn't predominantly about the Jewish experience. Bergen-Belsen started as a camp for Russian prisoners of war. Mittelbau-Dora was a forced labour camp for people from all walks of life and Jewish prisoners were not in the majority there. Similarly, at Buchenwald the Nazis incarcerated a whole range of victims and Jewish prisoners were a minority there too. I've been reading the excellent research into students' knowledge of the Holocaust published by the Centre for Holocaust Education at University College London which demonstrates that students lack contextual understanding of the Holocaust, its perpetrators and victims. We will seek to address this in our exhibition.

2. Don't avoid the truth about the past

We've had a lot of discussion in our consultation and interpretation meetings about how we talk about atrocities and what kind of imagery we should use. It's been received wisdom in Holocaust education (through guidelines from the International Holocaust Remembrance Alliance, for example) that students should not be show atrocity images for fear of depersonalising victims and that the focus should be on individual stories and testimony. The HSFA collection is focused on individual experience and we have always focused on the background to the Holocaust, ensuring students understand the breadth and depth of Jewish culture in Europe before 1933. We also ensure that our learning approach is age appropriate and sensitive to students' needs.  Our collection predominantly contains survivors' family photographs so we haven't previously had to address the question of using images of atrocities, but now HSFA is planning an exhibition telling the story of the Holocaust we need to make a choice. The German exhibitions were instructive in the considered approach they took to imagery. Photographs of atrocities are used, because not to use them would be to mask or even deny what the perpetrators actually did. But the images are not used as a focal point or as feature images, are always contextualised, and the text is clear about the circumstances in which the images were taken. We will be using images of atrocities in the new exhibition but we'll be doing so in a considered and sensitive way.

Halfway through the development of our HLF project we had a wobble. We were frightened of over-promising on the project; that we weren't going to be able to create a big enough exhibition and that we needed significantly more funding than we could hope to secure from HLF.  We were mid-wobble when we flew out to Hamburg. What we saw in Germany reminded us that great projects don't spring fully formed. Both Bergen-Belsen and Mittelbau-Dora have beautiful, purpose built, architect-designed exhibitions and visitor centres but these did not appear overnight, they developed incrementally over time. We felt reassured by this understanding and it has shaped the structure of our project and our approach to fundraising in the knowledge that small initiatives can grow.